skip to main | skip to sidebar

Editor’s note: I learned that Cap Video wrote the City Council and the Mayor yesterday about its plans for its store in Northampton, and its willingness to discuss matters with the City. So, I asked Cap Video to send me a copy and the below is what I received, including pictures of the interiers and exteriors of a store. In a follow up email to me Cap Video indicated that it would be willing to upscale even further its exteriors and interiors to be more tasteful and conservative in presentation than in the store appearing in the pictures.

I am writing on behalf of CAPITAL VIDEO CORPORATION to clear up any misconceptions regarding its proposed business in your community.

Capital Video operates over 40 'AMAZING' stores featuring the concept of “Excite Your Life”. The stores are oriented more as a ‘sensuality’ style business, with a focus on couples and women in the adult market. The company operates a few high visibility stores, including units on Rte 9 in Northboro, MA; on Rte 1 in Peabody, MA; and a store off of Rte 95 in Providence, RI. These stores are designed in a ‘mainstream’ manner, much like one would see in a Victoria Secret in a mall, with pleasant colors, music, carpeting. The stores carry a wide variety of adult novelty items, along with lingerie, gag gifts like one finds at Spencer Gifts, greeting cards, lotions, games, along with sexually and sensually oriented movies and magazines. Amazing even sells higher priced original erotic and sensual art and memorabilia. Attached hereto are pictures of actual operating Amazing stores.

Capital intends on opening an 'upscale' store in Northampton, and would be very receptive to discussions with the community on the look, feel and the approach that the store presents to the community. Unfortunately, a campaign has been waged against our business by individuals that have maligned the reputation of Capital Video. Contrary to published reports, Capital enjoys an excellent relationship with its host communities, and has not encountered any of the problems or detrimental effects that have been put forth. Our employees and the stores they operate are responsible members of their communities. A recent article in the Stonington Times in North Stonington, CT highlighted our store and its employees, exemplifying that they have been accepted with open arms by the community. There is absolutely no truth that our business increases crime, or detracts from the neighborhood in which we operate.

The ability for Capital Video to work with the community has been short circuited by the presentation of certain ordinances that have not allowed for any discussion about Capital’s specific plans, except for the short presentations given during the open council session. The company is not blind to the fact that sexuality and sensuality are touchy subjects, and it has an obligation to present itself in a mature and non-offensive manner. Capital’s intention is to drive more pedestrian traffic to the proposed location on King Street, and to create an environment that would enhance the development of other businesses in the area. We would be hopeful to be having a dialogue with the community to work on a plan that will improve the area, and provide a comfortable environment to all.

Northampton does not need the ordinances that have been proposed regarding adult businesses. The assumption that the proposed plans of Capital will be detrimental to the community are totally misplaced. Creating laws that are focused on stopping one business almost always creates reprecussions to many other businesses. Why create a law that is just not needed?

Capital Video encourages the Council to consider all the facts before it makes a rash decision, and hopes that the community will maintain its present laws that provide a culture that is sensitive to the needs of all members of the community. 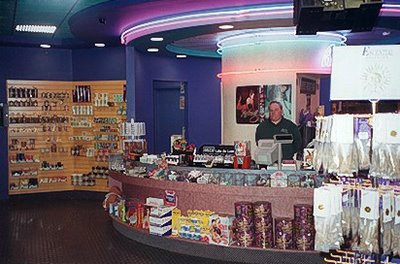 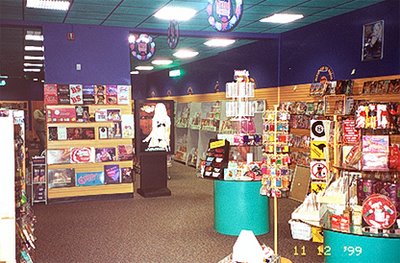 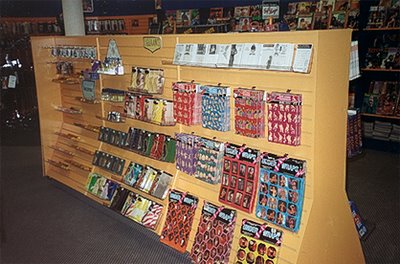 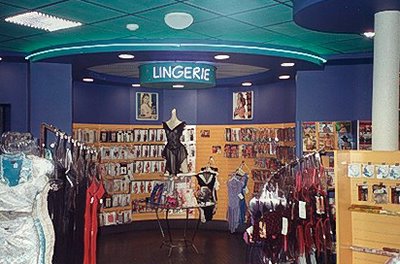 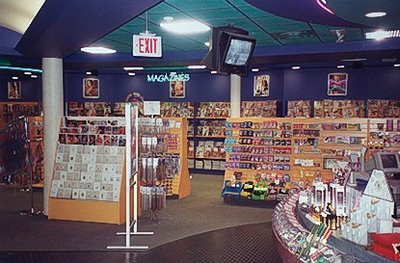 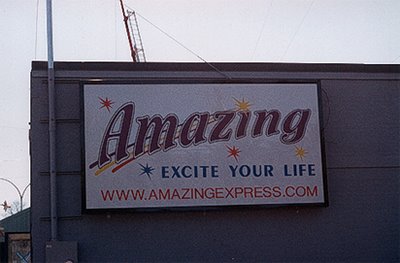 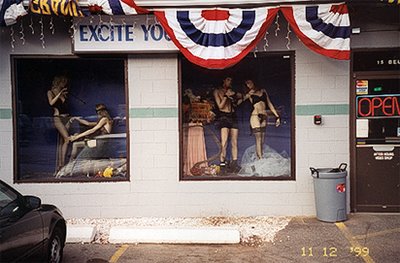 Posted by Always Controversial at 11:43 AM

A few things have changed for Guarino since the mid-1970s... One of his closest associates was killed under mysterious circumstances when he fell out of a moving car...

Law-enforcement sources, including those in the FBI, Rhode Island State Police and Providence Police, stated in interviews that Guarino has ties to organized crime, especially the Carlo Gambino family in New York City. There are these circumstances to support their statements:

Guarino's major supplier of pornographic magazines and films has been Star Distributors Ltd., a Manhattan company that is controlled by an associate of two crime families, those of Gambino and Simone (Sam the Plumber) DeCavalcante of New Jersey.

An undercover FBI agent who helped bring obscenity-related indictments against numerous associates of organized-crime families in the 1980 Miporn case said that, by agreement, Guarino handled trade of books, magazines and sexual devices in New England while the 16mm and 35mm movie business was reserved for the DeCavalcante family.

Late in 1977, Guarino made out two $7500 checks to an associate of the Gambino family. The money was the single largest payment made to any individual out of Guarino's corporate funds during the three-year period from early 1975 to February 1978, and it is labeled on Guarino's ledger book as "commissions..."

Guarino's company, Imperial Distributors, took over as the prominent distributor of pornographic magazines in New England in the early 1970s, from the now-defunct Atlantic Distributors Inc., also of Providence. Providence police contend that Guarino went to work for Atlantic around 1966 or 1967, shortly after he left Mount Pleasant High School in his junior year.

In 1969, then 20 years old, he started on his own and opened Imperial Distributors Inc. in Providence. Within two years, most of the adult bookstores in New England were buying their magazines and books from Imperial. The details of how Guarino assumed major control of pornography distribution from Atlantic Distributors are not known...

For pleasure, [Guarino] made frequent trips to Las Vegas, where he ran up thousands of dollars in casino "markers..."

The FBI assigned one of its accountants to review the several ledger books and other financial records seized at Guarino's Imperial Distributors headquarters. From that review, the FBI accountant concluded that Guarino was failing to declare thousands of dollars in income that his chain of retail stores was grossing...

In addition to inspecting Guarino's seized records, the FBI interviewed an accountant who had worked on Guarino's financial books from sometime in 1973 to February 1978. According to a confidential report on that interview, the former accountant, William J. Martin 3d, told the FBI that "Guarino was skimming over a half-million dollars a year" from his corporations and bookstores.

At the time that the former accountant made the charge, he was under indictment in Connecticut for embezzling more than $146,000 in four separate checks from his full-time employer, General Dynamics, in early 1978. Martin, according to the confidential report, later told the FBI that he had embezzled the money on orders from Guarino because Guarino needed money "for anticipated legal fees." However, Martin said he would not testify against Guarino in the case because he feared for his safety...

Lesley Rich asserts, "Capital enjoys an excellent relationship with its host communities, and has not encountered any of the problems or detrimental effects that have been put forth."

I doubt the people of Kittery, Maine would agree with Mr. Rich's opinion...

From the minutes of a meeting of the Kittery Town Council, February 27, 2006 (emphasis added):

a. (020206-1) THE KITTERY TOWN COUNCIL MOVES TO HOLD A PUBLIC HEARING ON AND HEREBY ORDAINS CHAPTER 5.40, AN ORDINANCE REQUIRING LICENSES FOR VIEWING BOOTHS OF ADULT ENTERTAINMENT ESTABLISHMENTS. ...Police Chief Strong came forward and said everyone was aware that this establishment had been a bone of contention for a long time. Although they had other regulations toward that establishment, it had come to his attention that there were either illegal activities going on or activities that were detrimental to the health and welfare of patrons and the general public. They started to pick up intelligence and interviewed a former employee, who had been in a managerial role for the company. During that interview, they were informed about certain activities and that basically it was a meeting place for homosexual males to meet people and engage in sex inside the booths and bathrooms, which the informant indicated he had personally witnessed. The Department continued to monitor the establishment and to research websites. The Chief made a sketch on the board for Council to see the establishment’s basic layout; the doors to “peek” booths were lockable from the inside.

Chief Strong said Fernald Road residents had complained about finding offensive trash on the road and the Department did their own surveillance, finding such items as empty pill bottles, lubricants, leather straps, movies, and used condoms within 100 yards of the rear of the establishment on Fernald Road. The Chief said they made the decision to send people in under cover and on two occasions, he sent two plain clothes detectives into Amazing.Net, arming them with special glasses and a portable ultraviolet light, which when shined on an area would illuminate body fluids. On January 30, two detectives went inside dressed in plain clothes and equipped with the ultraviolet light, as well as collection material. They entered booths, closed the doors, turned on the ultraviolet light and observed what appeared to be tremendous amounts of body fluids on all three walls and on the floor. The next night, the detectives followed the same procedure. Samples were sent to the Main Street Lab and on February 13, 2006, he received the results confirming that all swabbings taken in the four booths contained semen. The Chief said their informant told them that on numerous occasions he had tried to clean but had not been given any information on how to wash the areas properly. Police Chief Strong said he believed the collection of material they made, along with the lab results, showed beyond a reasonable doubt that there were body fluids being exchanged or deposited that other people were exposed to...

TalkBackNorthampton stands as an exemplar of citizen journalism, and Neurocam International would like to take the time to voice our unabashed support for your organization. In the contemporary age of evaporating freedoms, NI supports citizen journalism like TalkBackNorthampton which fights for basic freedoms even when no one else cares to. NI has observed a number of groups internationally and found that your website merits particular notice.

I would be going after the smaller places- the places which specialize in providing their customers with implements of pleasure doom. I'd demand the local leather store be closed, that adult stores selling floggers which were handcrafted by a local woman be righteously struck down. I'd be demanding that the local hardware store remove any and all products which might be used to tie or clamp anything. I would not be wasting my time on a commercial store which, despite its best intentions, will probably never carry anything sufficiently novel enough to write home about.


This is a debate I've had many many times over the years, and it never gets any less irritating. People are animals. Animals have sexual urges and desires. Is satisfying that urge on your own or with a consenting partner or partners really that terrifying? What is so scary about a business which caters to the sexual needs of adults?

Or are you scared that you might be lured inside while taking your evening stroll to peruse the french maid costumes and rubber c****s? Yeah, that seems the most likely explanation.

On the Lighter Side - Humor

Contribute to the Blog

If you would like to make a featured contribution to the blog, please feel free to contact us at always.controversial@gmail.com